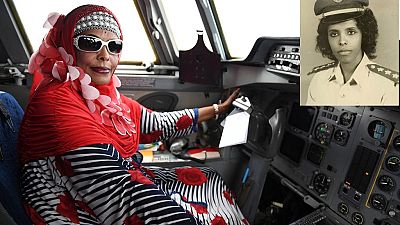 Somalia is celebrating the continent’s first female pilot who was an officer of the country’s Air Force decades ago.

The 59-year-old Asli Hassan Abade, returned permanently to Somalia in July 2017 after over two decades abroad. Till date, she is the country’s first and only female pilot having made her first flight in 1976.

She left Somalia in the 1970s to train as a pilot in Italy and later moved to the United States. She returned to her native land to join the Somali Air Force and started flying planes in 1976.

I could not believe that I was actually in Mogadishu. I looked at the ocean, raised my hands up and inhaled the fresh, natural and unpolluted air. It was a magical moment.

She attributes her successful career in the country’s Air Force to the support women received from the government in that era. She grew up near the Mogadishu airport back in the day and believes seeing planes fly and land fueled her interest in becoming a pilot.

After a decade of service with the Somali Air Force, Ms. Abade left the country again and married an American aircraft engineer.

“We settled in Dallas Fort Worth in Texas, to start a family. My husband and I are blessed with a girl and three boys,” she told the United Nations mission in Somalia.

Ms. Abade visited Somalia in July 2017 for the second time in six years. In 2011 she flew into Mogadishu to deliver medical supplies to the Forlanini (Lazaretto) Children’s Hospital as the country was grappling with its worst famine in many years.

She fondly recalled her 2011 trip which lasted less than 24 hours due to the presence of insurgent group, Al-Shabaab in the capital Mogadishu. “I did not have the liberty to move around Mogadishu like I am doing now, or talk to the media.

“There were several former colleagues, officers and pilots, waiting to receive me at the airport. I cried, and they all got emotional and cried with me. When I stepped out of the plane, I first kissed the ground.”

“I could not believe that I was actually in Mogadishu. I looked at the ocean, raised my hands up and inhaled the fresh, natural and unpolluted air. It was a magical moment,” she said.

Asli Hassan Abade is the #Africa's first female pilot and was an officer in the #Somali air force.#Somalia#TheAfricaTheMediaNeverShowsYou pic.twitter.com/gMURhLahBt

Asli Hassan Abade, the first female Somali pilot flew her 1st flight in 1976. She returns to Mogadishu this week after 25+ years: DalsanFM pic.twitter.com/V8egxMRkiu