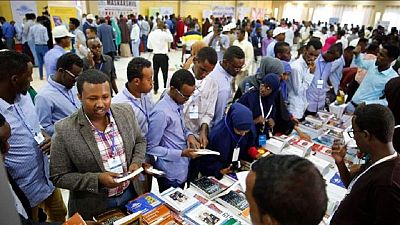 Hundreds of Somalis converged at the third annual Mogadishu Book Fair held for three days in the Somali capital.

The fair is touted as the biggest event in the country where the al Shabaab insurgency has become a stumbling block to social development.

Somali President Mohamed Abdullahi Mohamed Farmaajo said he was proud of the capital city and the country for organising the fair.

“A society that reads is a society that’s ready for progress,” he tweeted on the first day of the fair on Wednesday.

It’s the first day of the #Mogbookfair. Proud of #Mogadishu and #Somalia. A society that reads is a society that’s ready for progress. #guul pic.twitter.com/wYaUiY7qp5

Among the participants are award-winning photojournalist and activist Boniface Mwangi from Kenya, Somali language researcher Peter Chonka from the United Kingdom and book publisher Dominique Uwase Alonga from Rwanda.

Mohamed Sheik-Ali Ahmed, the founder and organizer of the event, said the fair was created to promote reading, Somali culture and heritage by bringing together literary creatives and young people.

Another organiser Said Bashir told local media portal Goobjoog that the event was postponed from the August date to September so as to be able to accomodate the international participants as well.

He added that they focused on new writers to show the world what they had to offer.

At the frontline of the venue .We've HE SomaliPM,this proves that the leaders have time 4promoting culture of reading. #MBF2017 is RAISING! pic.twitter.com/7h5ELDIKRO

The Mogadishu Book Fair was first organised in 2015 and has since gained a wider attention. Other Somali cities including Hargeisa, Kismayo and Garowe also hold annual book fairs.

Below are some sights from the event.

I am in Somalia attending the 3rd Mogadishu Book Fair. The fair promotes books, a reading culture and heritage by bringing together #MBF2017 pic.twitter.com/vH1F2TfLSk

Abdirashid, Somalia's popular singer with the famous song of “Anaa Anaa Soomaali, Wa Aftakhir” is now on the stage entertaining us. #MBF2017 pic.twitter.com/rKmdIKbfXv

At the frontline of the venue .We've HE SomaliPM,this proves that the leaders have time 4promoting culture of reading. #MBF2017 is RAISING! pic.twitter.com/7h5ELDIKRO

And now SomaliPM joins the #MBF2017 plz let's welcome the guests with warm greetings. Everyone in the room cheered! pic.twitter.com/ad276vzS8N

This young #Somalia artist (in a cap) too showcased products of his gifted hands in #Art at #MogadishuBookFair #MBF2017 pic.twitter.com/s00pMLg8Iv