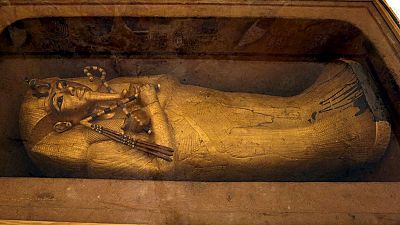 Egyptian archaeologists have discovered a tomb of a prominent goldsmith who lived more than 3,000 years ago, unearthing statues, mummies and jewellery in the latest major find near the Nile city of Luxor.

“The work did not finish yet and we’re continuing and working to find more objects and more tombs,” he told Reuters at the site.

The site includes a courtyard and niche where a statue of the goldsmith Amenemhat and his wife and one of his sons, as well as two burial shafts, the ministry said in a statement.

Earlier this year, authorities announced they had discovered another New Kingdom tomb in Luxor belonging to a judge, and Swedish archaeologists discovered 12 ancient cemeteries near the southern city of Aswan that date back almost 3,500 years.

Tourism in Egypt suffered in the aftermath of the mass protests that toppled former president Hosni Mubarak in 2011. Militant bomb attacks have also deterred foreign visitors.

Egypt’s tourism revenues jumped by 170 percent in the first seven months of 2017, reaching $3.5 billion, authorities said, in welcome news for an economy heavily reliant on the sector for foreign currency and jobs.