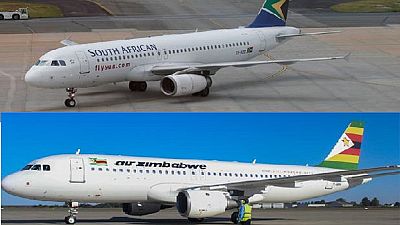 The Zimbabwean government has confirmed reports of flights disruptions between its capital, Harare and the South African city of Johannesburg.

A South African Airways (SAA) plane in Harare was refused takeoff leaving passengers stranded. Ahead of that, an Air Zimbabwe flight was also held in Johannesburg on Friday but the Zimbabwe government says it was purely an aviation issue and nothing political.

Media reports had sought to link the grounding of the planes to the issue of diplomatic immunity surrounding Zimbabwe First Lady Grace Mugabe, who is technically detained in South Africa on charges of assault.

Zimbabwe’s Minister of Transport and Infrastructural Development, Dr Joram Gumbo, confirmed the grounding of the airplanes describing the issue as operational and not political.

SAA now has to ferry passengers from Vic Falls to Zambia by bus. Air can’t be bothered, they are used to leaving passengers stranded

He said the failure of both airlines to renew their foreign operating licenses as required by international operations had led to the standoff.

He stressed that the issue was being handled by the respective civil aviation authorities because it did not need any political interference. He added that the two bodies had moved to resolve the situation to ensure the resumption of flights.