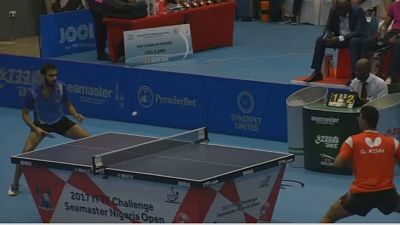 Egypt has emerged as winner of the 6th edition of an International table tennis tournament which ended over the weekend in Lagos Nigeria.

A household name in the game, Assar Omar, defeated Indian-born Sathiyan Gnanasekaran, by 4 sets to 0 to win a 5000 dollar prize.

“It is very special for me to play in Lagos, it is a fantastic feeling because there are many spectators and fans of table tennis, then you feel that you must play well here if you want to improve your ranking so I really appreciate coming here every year,“Egyptian winner of the men’s single, Assar Omar said.

In the women’s category, Egypt was at the forefront after Dina Meshref won the title.

This year’s edition also included workshops aimed at developing the game on the continent.

The training sessions are seen as a necessity. Many spectators deplore the fact that the level of many Africans remains very low in the game as they find it difficult reaching the final.

The four day tournament brought together players from 22 countries.