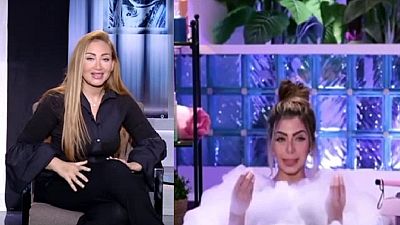 Two popular Egyptian television presenters have been suspended by the country’s media union for discussions on their programmes last week that were deemed immoral.

According to state news agency MENA on Tuesday, the two presenters – Reham Saeed and Doaa Salah – have been suspended for three months and can appeal the decision within 15 days.

Reham Saeed is reported to have discussed extra-marital affairs on private TV channel Al-Nahar last week by introducing a married woman and her lover.

She is accused of exploiting stories for attention, resulting in two prison sentences for defamation which she narrowly escaped after appeals.

Doaa Salah, on the other hand, is reported to have discussed the choices of women to be single mothers on her television show on the same channel last week.

She is also accused of performing “bizarre and controversial acts” on her programme including wearing a fake pregnant belly and opening her show with a bubble bath in a bathtub.

The head of the media union Hamdy El-Konayissy said in a statement cited by local media Ahram Online that they discussed deviant issues in Egypt which “breached professional and ethical standards.”

“The discussions promoted immoral ideas that are alien to our society and threaten the fabric of the Egyptian family,” he said.

The union warned the channel to uphold the decision or be held liable.

The report explained that the union warned Saeed Hassasin for hosting guests who fought on TV in an episode and Mohamed El-Gheity for accusing agriculture ministry officials of corruption without evidence.

The media union was founded this year to regulate the media.