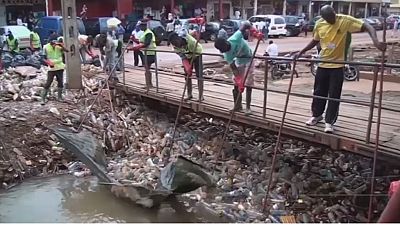 Plastic waste has become a major problem in Cameroon’s capital, Yaoundé clogging up drains and rivers and causing flooding in the city whenever it rains.

Cameroon’s government has been trying to tackle the country’s plastic pollution troubles for years, but with little success.
Yaounde’s streets are littered with piles of plastic bags and bottles and residents are worried.

Cheaper than other alternatives, plastic bags and bottles are popular in a place where the average income is less than 500 Central African francs (cfa) ($5) a day, and laws aimed at curbing the use and sale of disposable plastics remain ineffective.

My foundation which deals with the environment came here to help clear all this waste, and clear the river of plastic waste.

“When it rains, the river floods and the plastic bottles come all the way to our houses.They also cause us to get sick, and they also emit a foul smell. We cannot sit in our compounds because of the polluted air, we only breathe in bad air,” said a Yaounde resident, Eveline Massock.

However, an initiative by one of the country’s most prominent personalities, retired Cameroonian footballer Roger Milla is hoping to solve the problem by turning plastic waste into building material.

“My foundation which deals with the environment came here to help clear all this waste, and clear the river of plastic waste which has been affecting the local population and also allows water to flow as it should,” he said.

The waste is picked up by Hysacam and sorted, then another group of young people different from those collecting the plastic melt it down in a large tank over a wood fire.

“We think that it’s a good project for the future of tour country, especially when it comes to the fight against pollution. It’s also good because this is also a source of revenue and job creation for young Cameroonian youths,” said Director general, Coeur d’ Afrique, Arsel Etoundi.

Officials say the recycled slabs have already been used by the Yaounde city council for various projects and by the National Olympic sport committee in the construction of the national handball field.