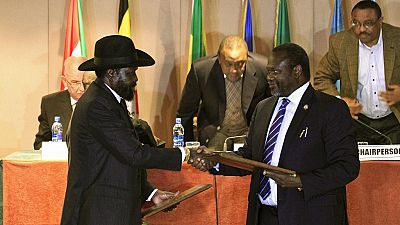 Signed in 2015, the deal collapsed when rebel leader Riek Machar, appointed First Vice President in a unity government under President Salva Kiir, fled the country after fighting broke out in the capital Juba last July.

The government says it is implementing the peace deal after appointing a replacement for Machar, and the West has stood by it until now.

But the donors from the European Union, the United States, Britain and Norway said they would offer no further support. They have not specified how much funding they have been providing.

Parts of the agreement signed between the two men were “obsolete in light of the expansion of conflict since 2015,”

they said in a statement issued late on Thursday.

South Sudan gained independence from Sudan in 2011 but plunged into civil war in 2013 after Kiir fired his then deputy Machar.

The war has split the country along ethnic lines, killing tens of thousands and displacing nearly a quarter of the 12 million-strong population. Millions face famine.

A national election, which the deal stipulates should take place next year, would now be an “unnecessary diversion” from ending the war given the widespread violence, displacement and hunger, the donors said.

Government spokesman Michael Makuei said the government would participate in efforts by East African nations to boost the peace process.

But he refused to commit to including Machar as part of an inclusive plan that Western nations have called for.

He accused the West of having “unstable opinions” for changing stance on backing the peace deal and elections.

“This (peace deal) is their child and it is their duty to ensure that this child survives,” he told Reuters. “If they don’t want to support, then let them be quiet.”

Senior rebel official Nathaniel Oyet said revitalizing the deal was the “final opportunity” to save the country from “total disintegration,” and dismissed talk of holding an election.

“War continues unabated in the countryside,” he told Reuters. “Where will the polling stations be? The front lines?”

South Sudan has never held national elections as an independent nation. In 2015, its parliament postponed them for three years by amending the constitution to extend Kiir’s term and their own.