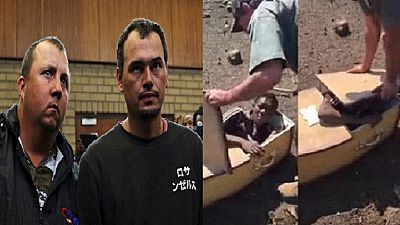 The two white South African farmers accused of forcing a black man into a coffin have finally been granted bail by a the Middleburg Magistrate court.

The decision to release them on a $77 (1,000 rand) bail sparked outrage in the court when judgement was announced.

Theo Jackson and Willem Oosthuizen are accused of forcing Victor Mlotshwa into a coffin in November last year. They are charged with kidnapping, assault and attempted murder.

In a video that went viral back then, the two are heard threatening to burn their victim. They went to tell him that they will drop a snake into the coffin.

The video cause outrage in the country where racial tensions are very strong. The trial is slated for later this month.

The defence they gave for their actions was that they wanted to deter Mlotshwa from trespassing on their property and that they did not mean any harm.