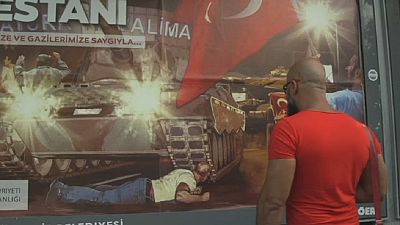 Turkey is marking one year since a failed coup that was meant to oust President Tayyep Erdogan.

On July 15, 2016, some soldiers used the Force’s armory including jet fighters and tanks to seize airports and bridges aiming to capture power.

Lives have changed forever from that day. While over 240 people died on the night of the failed coup, some became heroes, like Metin Dogan.

The 41 year old high school teacher threw himself in front of a tank at Istanbul’s Ataturk airport to stop the coupists.

12 months later, Dogan now speaks at local gatherings and universities, telling people about the moment that changed his life.

“I thought if people would see someone being crushed under the tank tracks live on television, they would pour out into streets without thinking about anything else”, Dogan said.

One of those suspended from work is a Kurdish actor, Vural Tantekin, who now works as a cook and waiter at a restaurant in mainly Kurdish southeast Turkey.

The crackdown, and the strongly contested April referendum which granted Erdogan greater powers, have strained Turkey’s ties with the European Union, shattering its dreams of joining the block.

33,000 people have been restored to their positions in acknowledgment of the state’s mistakes but the government insists the failed coup is linked to Gulen.

President Erdogan will give a speech in Ankara at 2:34 a.m. on Sunday , a year to since parliament came under fire.