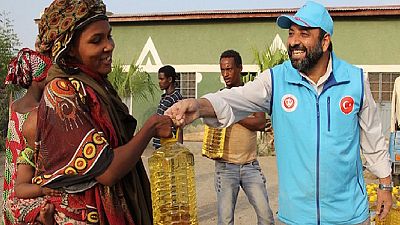 Turkish authorities have donated food items to 1,500 families in Ethiopia’s northeastern Afar regional state, which has been hit by a biting drought since early this year.

The supplies form part of the Turkish Presidency of Religious Affairs’ (Diyanet) Ramadan support which is targeted at 65 countries and 278 regions during the holy month of Ramadan. 40 tons of food aid had been delivered to the families according to a directorate official.

The Turkey Diyanet Foundation (TDV) project manager told the state-owned Anadolou Agency that the choice of Afar regional state was due to the hardships that the drought had brought unto them.

People say they are pleased to see that their Muslim Turkish brothers are with them during Ramadan. We enjoy the blessings of Ramadan with our brothers here and Turkey's goodwill will continue to reach the world via TDV.

“People say they are pleased to see that their Muslim Turkish brothers are with them during Ramadan,” Yuksel Sezgin said.

The Afar Regional State is one of the nine regional states of Ethiopia, and is the homeland of the Afar people. It was one of the regions in the Horn of Africa nation that was said to be in dire need of aid in January 2017.

A Diyanet official in the Ethiopian capital, Addis Ababa, also said that the TDV had earlier delivered emergency aid of about 160 tons to 5,000 families a month ago.

“We enjoy the blessings of Ramadan with our brothers here and Turkey’s goodwill will continue to reach the world via TDV,” Mustafa Acar said.

Turkish President Recep Tayyip Erdogan in March this year announced that his country had launched an aid campaign to help four East African countries hit by an acute drought.

According to Erdogan, Turkey’s effort was aimed at helping Kenya, Ethiopia, South Sudan, Somalia and Yemen, all of who are ‘‘at risk of suffering a major humanitarian crisis.’‘

‘‘We cannot afford to turn a blind eye to requests for help from those countries where the drought-related hunger has reached critical levels,’‘ he said in a tweet.

Turkey launches an aid campaign to reach people in East Africa and Yemen who need our urgent assistance.

Diyanet is an official state institution established in 1924 by article 136 of the Constitution of Turkey. Its duties include “to execute the works concerning the beliefs, worship, and ethics of Islam, enlighten the public about their religion, and administer the sacred worshiping places”. 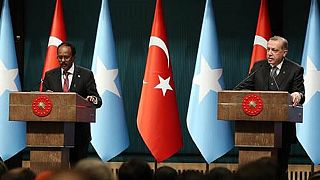