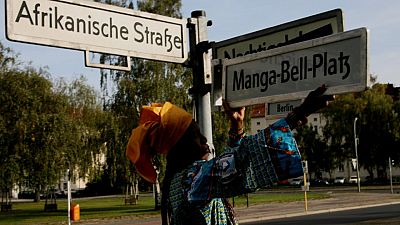 Wandering around the northeast part of Berlin’s Wedding neighbourhood, it would be easy not to realize you have entered the city’s so-called African Quarter. The mix of early 20th century apartment buildings and communist tower blocks resembles many other parts of the German capital. Only a glance at the street signs offers a hint to an unexpected history.

It wasn’t always so. The creation of Berlin’s African Quarter in the late 1800s was originally linked to the establishment of a ‘Volkerschau,’ a human exhibition in the area, where people from the colonies were brought from their countries and held in zoo-like conditions, in order for Berlin residents to become familiar with their physical aspect and cultures. Kamerunstrasse and Togostrasse were the first streets to receive their names in 1899.

Later, came Kongostrasse as well as monikers to celebrate the colonial figures such as Nachtigalstresse. Gustav Nachtigal was the second founder of German colonies in Africa, annexing Togo and Cameroon for the empire. He led a bloody campaign against Cameroonians who opposed colonial rule.

The problematic history that is celebrated by the neighbourhood’s street signs is little recognized by local residents, let alone further afield because German’s colonial history gains little space in school curricula. Which is where PostKolonial comes in.

The group, co-ordinated by historian Christian Kopp, aims to inform and encourage debate around some of the problematic issues of race, identity and historical legacy raised by these monuments to the past. They propose adding commentaries alongside the street signs to recognise the different historical perspectives and replacing those commemorating figures of colonial repression with the names of their victims or opponents.

“There is still very little awareness about the colonial context of these street names,” observes Kopp. “Many do not see more than a geographic reference to Africa, Asia or Oceania.”

Kopp’s conviction is that “Germany’s dealing with African countries is still marked by ignorance and arrogance and we can sense hardly any signs of a kind of historical responsibility for the colonial reign of terror. A majority of white Germans still believe that the country has given more to Africa than it has taken away.”

Jenny Engler, an author and researcher at Humbolt University, agrees. The issue reaches beyond academic debate and into the lives of Germans today, she argues, because street names quite literally form part of the identity of citizens. Failing to recognize and challenge the one-sided perspective they present means continuing to propagate a kind of exclusion, that can support an entrenched structural racism, she argues.

Of course the issue runs deeper than just the street signs. Postkolonial organises seminars and guided tours around the role of Germany in the slave trade or historical crimes. It wants Germany to return remains used in eugenics research as well as looted cultural artifacts.

“How can we unlearn racism and democratise postcolonial social and global structures if we have no knowledge about the long global history of colonialism and racism?” Kopp wonders.

Such a process of education and recognition “could build momentum that may profoundly change the economic, political relations between the African Union and the European Union as well African countries and Germany,” added Marianne Moudoumbou, the Cameroonian leader of the Central Council of the African communities in Germany.

As far as official policies are concerned, the German government has recently taken some concrete steps regarding the country’s colonial past. It moved to recognize the Namibian genocide following pressure from the ‘No Amnesty on Genocide’ campaign, started in 2011 and demanding justice for the descendants of the Ovaherero and Nama. Germany had declared it did not intend to repay the damage done, but rather provide development aid and projects offered as an act of charity. The descendants of the Namibian genocide victims are far from content with this and are currently seeking justice in international courts.

According to Nicolai Roschert from AfricAvenir International, a nonprofit engaging in political and cultural education from an African perspective, it is “unacceptable that the German government has not issued an apology and does not negotiate [directly] with the descendants of the Herero and Nama people directly and include them in any solution of restorative justice and reconciliation.’

He added that similar actions should be untaken by Germany towards the affected governments of other former colonies, especially Tanzania, Cameroon and Togo.

It should apply in colonial matters, “the same moral standards as in restoring justice to Holocaust victims,” suggested Kopp.