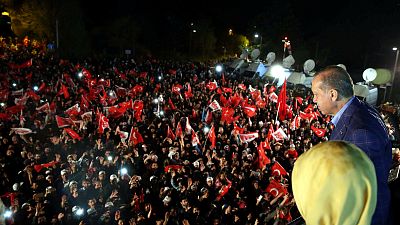 Turkish President Recep Tayyip Erdogan has declared victory in a referendum granting him sweeping powers and which could keep him in office until 2029.

The constitutional changes replace Turkey’s parliamentary system with an executive presidency which supporters say will modernise the country.

“These constitutional reforms are not ordinary changes. This is different and this is very, very meaningful. It is the first time in the history of Turkey that the parliament and people decided on such an important change.” The president was refering to the military coups which have marred Turkish politics for decades.

The changes which include scrapping Prime Minister Binali Yildirim’s job, will come into effect after the next election in 2019.

The package of 18 amendments will give the president the authority to draft the budget, declare a state of emergency and issue decrees overseeing ministries without parliamentary approval.


Turkey’s opposition parties who have accused Erdogan of seeking a “one man regime” have questioned the legitimacy of the vote.

The People’s Republican Party (CHP) earlier said it would demand a recount of up to 60 percent of the votes after Turkey’s High Electoral Board (YSK) announced it would count ballots which had not been stamped by its officials as valid unless they could be proved fraudulent.

Official results will be published in 12 days time.

#Turkey's PM Yildirim tells #AKP supporters “we are one body, we are one nation.” Referendum result says opposite. https://t.co/k2umeRWPyD