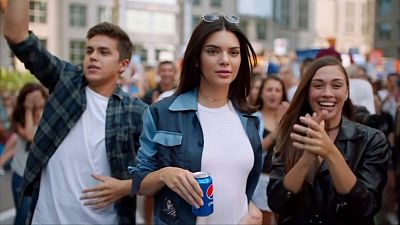 Pepsi has withdrawn and apologised for a new advertising campaign featuring celebrity and model Kendall Jenner. It follows a backlash for a video that has been accused of undermining the “Black Lives Matter” movement against police brutality.

In it, Jenner leaves a photoshoot to join protesters calling for love and peace, before handing a can to police as a peace offering. The officer cracks a smile and the crowd cheers.

Critics claim it paints a “privileged, white” supermodel as a peacemaker between civil rights activists and police, all in the name of selling cola.

"Clearly we missed the mark"

In particular some have suggested the ad looks similar to a picture of Leshia Evans who was charged by riot police in Baton Rouge, Louisiana, in 2016.


“Protester Leshia Evans in Baton Rouge in 2016, not 1960. The portrait of courage” The power of #Resistance being very clear in your center. pic.twitter.com/AgjEi98UVw

Bernice King, the daughter of civil rights leader Martin Luther King Jr, has gone on social media posting a photo of her father with the tag, “If only Daddy would have known about the power of #Pepsi.”


If only Daddy would have known about the power of #Pepsi. pic.twitter.com/FA6JPrY72V


Social media quickly became alive with mocking messages and photos about the ad and the product.


Pepsi initially defended the video saying it “reflects people from different walks of life coming together in a spirit of harmony”. But later admitted “they’d missed the mark”.