'Pulse of Europe' rallies show support for a united Europe 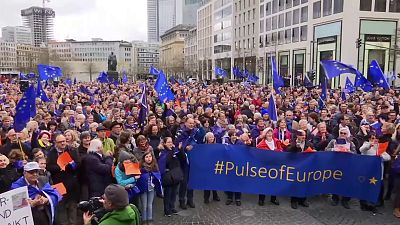 There has been a show of support for a united Europe in around 60 cities across the EU.

Thousands turned out to highlight their common values from Frankfurt in Germany to Bath in the UK.

“We want to show there are not only right-wing nationalists protesting, us pro-European people also have a voice” #pulseofeurope #Cologne pic.twitter.com/oY79Ktqgbe

The rallies were organised on social media by a group calling itself ““Pulse of Europe”“:http://pulseofeurope.eu/?lang=en .

The protests began last year as an attempt to counter growing nationalist sentiment on the continent, often expressed in opposition to the European Union.