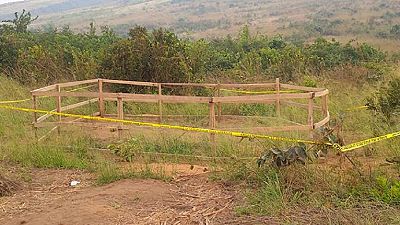 Journalists have visited for the first time the site in the Democratic Republic of Congo where bodies of rebel fighters were buried last month after clashes with security forces.

Reuters was unable to determine the exact number of bodies the Kamuina Nsapu militia fighters in eight mass graves dug in January and February in Congo’s Kasai-Central province.

The United Nations said it suspects that Congolese forces killed 84 militia members close to the town of Tshimbulu between Feb. 9-13.

The government denies its soldiers used disproportionate force and says they have recovered automatic weapons from militia fighters after clashes.

Government spokesman Lambert Mende told Reuters that the bodies in the mass graves were those of Kamuina Nsapu fighters and it was the group who had buried them, not the army.

“I don’t see why the soldiers would hide the fact, that after clashing with the terrorists, the terrorists died,” he said, adding that the army killed militia fighters in the clashes.

Leaders of Kamuina Nsapu could not be reached for comment.