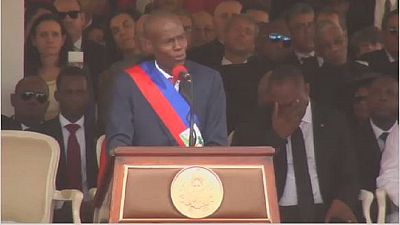 Newly elected Haitian president Jovenel Moise has officially taken over as the country’s head of state.

His investiture puts an end to a political stalemate which has rocked the country for more than one year now.

The new head of state is now ready to face the country’s numerous challenges .

Haiti basically exports bananas and Moise who is inheriting a dilapidated economy and divided population says he is counting on all Haitians to rebuild the country.

“Together we will build the country . As you are already aware agriculture is a priority. I am sure you know this because thats what I have been telling all men and women,” Jovenel Moise said during the swearing in ceremony.

After the cancellation of the first round of the the presidential election in October 2015, following fraud accusations, Jovenel Moise was later declared winner of the second round election organised in November 2016.
His main job now will focus on reconciliation and reconstruction of Haiti which is still struggling to recover from the devastating Hurricane Matthew which caused more than 1000 deaths.