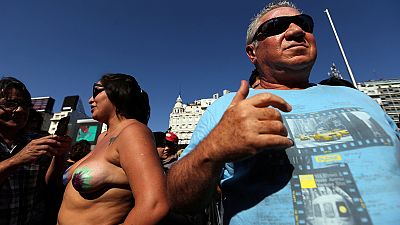 Following the banishing of bare-breasted women sunbathers from a beach in Buenos Aires, dozens of topless protesters, along with hundreds of fully-clothed supporters have taken to the streets. They hope to claim their right to sunbathe semi-nude, just as men do.

“In many places, when a woman reports gender violence, they don’t listen, but when a woman shows her breasts they send so many police,” said Grace Prounesti Piquet, a 33-year-old photographer with the words “The breast is not a crime” painted in pink on her back. “It’s a shame.”

After drawing unwanted male attention, some of the women reportedly shouted ‘get out!’

The demonstration is one of a series in recent months relating to gender inequality in the country.