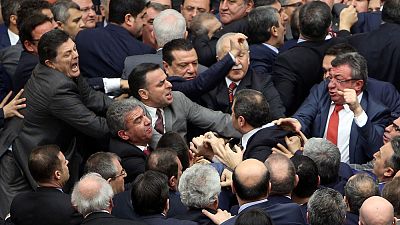 Scuffles broke out on Wednesday (Jan. 11) between lawmakers in Turkey’s parliament at the end of a debate over a package of constitutional amendments.

Blows were exchanged when ruling party members displayed their votes in what the opposition said should have been a secret ballot. They accused the government of trying to exert pressure on them to back the amendments.

Critics opposed to the changes claim they will give President Recep Tayyip Erdogan too much power.
Erdogan has long pushed for the amendments, insisting that a strong leadership will make Turkey stronger.