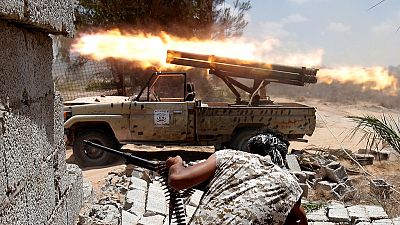 After months of combat, Libyan forces have taken full control of the town of Sirte, former headquarters of the Islamic State (IS) group, a spokesman has said.

Forces loyal to the Tripoli based Government of National Accord (GNA) received the backing of US air strikes in the final stages of the fight to retake the town. The insurgents had been fighting back usually using suicide bomb attacks.

The last group of buildings in the Ghiza Bahriya neighbourhood, where the militants were holding out, had fallen to troops led by brigades from Misrata, spokesman Rida Issa further disclosed.

Sirte is on the south coast of the Gulf of Sidra and lies halfway between the capital, Tripoli and the town of Benghazi.

The north African country was plunged into chaos following the forced ouster of long time ruler Muammar al Gaddafi. President Obama has described it as ‘‘the worst mistake of his presidency’‘ revealing that there was no plan after the overthrow of Gaddafi.

Gaddafi, who ruled Libya for close to five decades was killed in 2011 after western forces invaded the country. Libya has since been split among rivals governments ruling different parts. IS took advantage to seize parts of Sirte – the birthplace of Gaddafi and where he was killed.

Libya now has rival governments ruling different parts of the country, even though the UN backed government in Tripoli led by Fayez al-Sarraj has gained international trust and support over the last few months.

Libyan family searches for missing son, a year on

Libyan family searches for missing son, a year on