Mugabe praises Castro – 'He was leader of all revolutionaries' 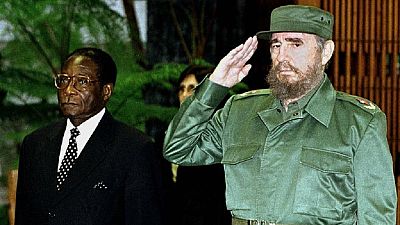 Zimbabwe’s President Robert Mugabe arrived in Cuba on Tuesday for the funeral of former leader Fidel Castro who died at the age of 90. Mugabe has been singing the praise of the Cuban leader in Havana.

The state-owned Herald newspaper reports that whiles addressing Cubans after after his arrival in Havana, Mr Mugabe paid tribute to the man widely known as the ‘leader of the Cuban revolution.

‘‘Fidel was not just your leader. He was our leader and the leader of all revolutionaries. We followed him, listened to him and tried to emulate him.”

Fidel was not just your leader. He was our leader and the leader of all revolutionaries. We followed him, listened to him and tried to emulate him.

SUGGESTED READING The 1977 Ogaden war: Why Somalis fume at Castro but Ethiopians celebrate him

Back home, Zimbabwe’s opposition parties have accused Mugabe who is 92 years of failing to follow Mr Castro’s example by stepping down. Local media quoted an opposition spokesperson, Iphithule Maphosa, as saying ‘‘We urge Mugabe to pluck a leaf from Castro and do the right thing and resign over old age and reports of ill health.”

Mugabe is the only president that Zimbabwe has had since independence in 1980. His party, the ZANU-PF, has confirmed that he will run for office again in the 2018 presidential election.

Mr Castro stepped down in 2006 after ruling Cuba for 47 years. His brother, Raul Castro took the leadership after Fidel stepped down. In the case of Zimbabwe, issues of succession have come up now and again with a huge infighting between party members.

Recently, Mugabe expressed concerns about the jostling for his position whiles he was still alive. He is reported to have said that if he has to leave, he will do so properly. The southern African country has been suffering from an economic crisis and acute drought.

Opposition protests have been met with heavy security crackdown in parts of the country whiles a police ban on protests remains in place in the capital, Harare.