No mountain too high for Impi Visser 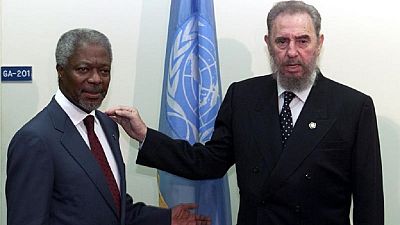 Since the death was reported on Saturday of Fidel Castro, leader of the Cuban revolution; reactions continue to pour in from around the continent.

Most social media savvy presidents have sent condolence tweets. Some governments have also sent official statements to the government and people of Cuba over the death of the 90-year-old.

Kofi Annan, a former Secretary General of the United Nations, on Sunday joined the list with a social media post celebrating the life of Castro who he described as ‘‘one of Latin America’s most remarkable leaders.’‘

His statement read, ‘‘Today I mourn the loss of a friend, the late Cuban leader Fidel Castro. Securing the welfare of the Cuban people and ensuring the independence of his nation shaped much of Fidel Castro’s thinking and many of his actions.

‘‘Whether one shared his political views or disagreed with them, Fidel Castro was one of Latin America’s most remarkable leaders. In the course of his long life he overcame countless adversities and rarely chose the easy and comfortable path.

‘‘I met Fidel Castro many times over the years and came to appreciate his extraordinary intellect, sharp mind, and his ability to engage in constructive dialogue. Farewell Fidel,’‘ his statement concluded.

The South African government also issued a statement, it came after the Mandela Foundation’s condolence message
which was issued hours after the death was reported.

After South Africa gained freedom in 1994, Cuba and South Africa, under Presidents Castro and Mandela respectively, formed a strong bond of solidarity and friendship. Cuba was an open supporter to the anti-apartheid struggle.

“As a way of paying homage to the memory of President Castro, the strong bonds of solidarity, cooperation and friendship that exist between South Africa and Cuba must be maintained and nurtured,” he added.

Below a collection of tweets by African leaders celebrating Fidel Castro

Fidel Castro was a great friend to Africa, to countries in the Global South and to the Non-Aligned Movement. His place in history is assured

Castro also demonstrated to the world that sovereign equality is a paramount idea that must prevail at all times.

Fidel Castro was a friend, brother and leader. My sincere condolences to the people of the Republic of Cuba. May his soul rest in peace pic.twitter.com/atwhBzizvx

On Behalf of myself and the people of Tanzania, our deepest sympathies go out to the people of Cuba on the death of Fidel Castro.

Comrade Fidel Castro will forever remain in our hearts and minds – he helped shape the world!

The _AfricanUnion stands in full full support & solidarity, as always, as #Cubans mourn the passing of their leader, #FidelCastro.

Today, I extended my deepest condolences to the President and People of Cuba following Fidel Castro's demise. I salute a Great Leader in him

Fidel Castro was a source of inspiration for all those who value and fight for freedom. Full statement here: https://t.co/rsb8MlAnWf pic.twitter.com/9GU1tPiqXZ 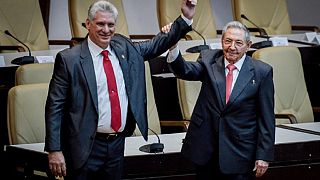