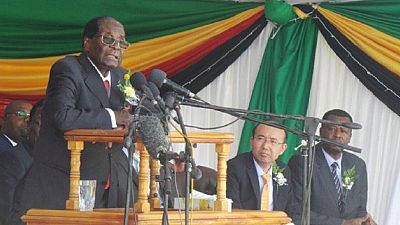 Zimbabwean President, Robert Mugabe, on Friday officially opened the Victoria Falls International airport. The facility was funded by the China Exim Bank at the cost of $150m.

The airport was opened in 1966 as a regional airport but efforts to upgrade it to the ‘international’ status started three years ago. It is expected to be able to handle up to 1.5 million passengers each year.

With the current expansion, bigger aircrafts like the 747 Boeing will be able to land at the 60-meter wide, 4km long runway, the state owned Herald newspaper reports.

The upgrading is indeed a milestone achievement and Zimbabwe forges ahead with the transformation of its air transportation, forging ahead naturally with its all weather friend.

‘‘The upgrading is indeed a milestone achievement and Zimbabwe forges ahead with the transformation of its air transportation, forging ahead naturally with its all weather friend.

“This airport signifies exciting times for aviation and tourism sectors and paves way for Victoria Falls town to become a tourism hub for SADC and the rest of the African continent,’‘ President Mugabe is quoted to have said.

On his part, the Chinese Embassy’s Charge D’Affairs who represented the country’s ambassador said, ‘‘I’m grateful to attend this completion ceremony, a milestone in our bilateral relations … it shows the enduring friendship between China and Zimbabwe. This landmark project means a lot for both our countries.’‘

The official also noted other interventions that the Asian giant was undertaking in Zimbabwe. He mentioned the 5500 tonnes of rice donated to help alleviate drought in parts of the country and the provision of fertilizers and boreholes in other areas.

The main tourist attraction in the area the airport occupies is the ‘‘Victoria Falls,’‘ or ’‘Mosi-oa-Tunya,’‘ a waterfall in southern Africa on the Zambezi River at the border of Zambia and Zimbabwe. It has been described by US-broadcaster, CNN, as one of the Seven Natural Wonders of the world.