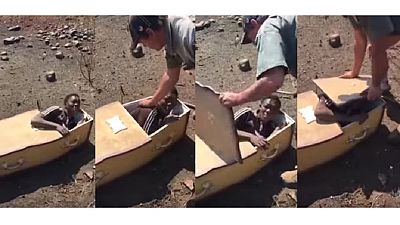 A 20-second video making rounds on social media shows a black South African man being forced into a coffin in Johannesburg by two white men who threatened to burn him in the Africaans language.

The incident is said to have taken place at JM De Beer Boerdery neighbourhood next to Komati Power Station, according to the South African revolutionary socialist party, Economic Freedom Fighters (EFF) which took up the case.

“These white racists then took a video and put it up on social media for amusement after humiliating [Victor] Mlotshwa. This humiliation can be based on nothing else but his blackness, which means it is in actual fact a humiliation of black people as a whole,” EFF spokesperson Mbuyiseni Quintin Ndlozi said in a statement.

Press Alert: EFF Leadership Will Attend the Court Case of White Men who Assaulted a Black Man & Put Him in a Coffin https://t.co/8xPEUWngYx

The two white men, Willem Oosthuizen and Theo Martins Jackson, are expected to appear before Middleburg Magistrate’s Court in the northeastern Mpumalanga province on Wednesday for kidnapping and assault with intent of causing grievous bodily harm, AFP cites a judicial source.

In the 20-second video posted on YouTube, one of the white men speaking in Afrikaans is seen forcing the victim Victor Rethabile Mlotshwa into a coffin and threatening to pour petrol on him. They are also accused of threatening to place a snake into the coffin.

Watch the video below: