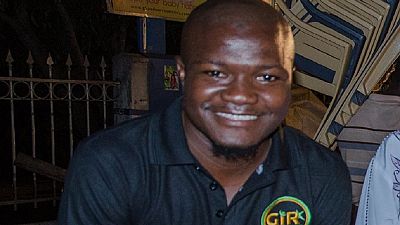 Seated in the far end of his office in New Town, a suburb of Ghana’s capital, Accra, Shaibu seems busy with work on his laptop. So busy he barely recognized that there was someone looking.

Shaibu Hussein Zachariyya is in his early thirties, he ‘crashed’ into app development after university, today he runs one of Ghana’s biggest religious platforms.

Despite his degree in Economics and Spanish from the country’s premier university, the University of Ghana, he tells me he is a ‘graphics and web designer’ and also a programmer. He is however best known as the founder and Chief Executive of GH Islamic radio.

We join other civil society groups in the country to advocate for peace before, during and after our December 7 general elections, it is a civic as much as it is a corporate responsibility and we are committed to it 100%.

I asked him how he ‘crashed’ into app development which had nothing to do with the course he studied in university.

‘During my national service – a year of mandated service for varsity graduates – at MTN, I attended a program on app development with my then boss, I became fascinated about how apps work, I left the program with the determination to learn how to program and develop applications,’ he said.

‘There was a problem, I had zero knowledge on computer science, but if I had listened to the voices of doubt, today I wouldn’t be who I am. It was a great battle though, today I am my own boss,’ he said smiling.

He underlines the ability to go through programming class alongside his schooling as a source of pride and down to the will to accomplish a dream. ‘Together with some friends who shared my dream of an online radio platform, today we are heard almost all over the world.’

What is GH Islamic Radio?

GH Islamic Radio (GIR) is an online radio that makes it easy for people all over the world to listen LIVE, to Islamic events, lectures, friday sermons etc. in the comfort of their home via the internet.

People can listen via their website [islamicradiogh.com] and android App – fully created and managed by Shaibu – and is available for free on Google Play Store.

After two years in operation, the platfom boasts of a listener base of 50,000 plus, people from 152 countries across the globe tune in on a daily basis. ‘Clearly we have come very far even though as a team, we are certain there is more to be done,’ Shaibu noted.

With a big smile on his face, Shaibu says GIR has only one achievement as far as he was concerned and that is, ‘we have remained operational despite challenges especially for an infant company as ours, our existence till date is our motivation,’ he added.

He says the challenges largely rested on funding. The ability to get advertising onto the platform has proven a headache. The reason for which the board had decided to seek funding to expand operations into a fully fledged radio station.

He is however happy that the radio had become a point of call in matters of Islamic events in the country. GIR has been at the heart of covering visits by popular Islamic scholars to Ghana.

He cites the visit of Indian preacher Dr. Zakir Naik, Jamaican cleric Dr. Bilal Philips and the most recent being that of inspirational preacher and religious teacher Mufti Ismail Menk of Zimbabwe.

As we chat along, Shaibu intermittently responds to messages on his laptop and phone. He tells me listeners with issues often send messages seeking GIR’s assistance and as the only full time employee for now, that responsibility rests on him.

He also highlights how the radio has encouraged and pushed the frontiers of inter-religious coexistence by hosting debates and religious exchanges between Imams and priests.

He is upbeat that GIR can play role in the upcoming polls in the country. ‘We join other civil society groups in the country to advocate for peace before, during and after our December 7 general elections, it is a civic as much as it is a corporate responsibility and we are committed to it 100%,’ Shaibu added.