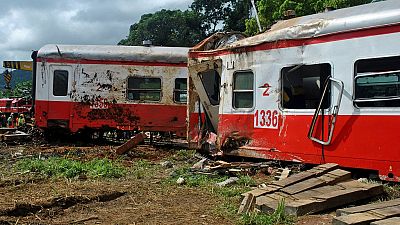 An official of French company, Bollore, has disclosed that one of the key factors that contributed to last Friday’s deadly train accident in Cameroon was speed.

Eric Melet, chairman of Bollore Africa railways told Reuters in an interview that, “what we can say is that the train, while approaching the station where it derailed (Eseka) was going at an abnormally high speed.”

He added that the train which is operated by Bollore’s subsidiary Camrail, was running at about 80 km per hour (50 miles per hour) when approaching the station. That speed he disclosed was twice the average normal speed.

The accident occured in Eseka on the line between the country’s main cities, Douala and the capital, Yaounde. It claimed at least 79 people and injured hundreds more, he confirmed.

Whiles he confirmed that the company had doubled the size of the train to 16 carriages, with permission of the authorities, to make room for extra passengers. He also refuted claims that the trains were overloaded at the time of the accident.

“The number of wagons was adapted to the situation, however, remember the context within which this was happening. Given that the main high way between Yaounde and Douala was cut off the same night, there was a very high passenger demand from 0800 am at the station,” Melet added.

President Paul Biya declared Monday a day of mourning after the incident and vowed to probe the circumstances surrounding the incident.