Liverpool to wear 'special' jersey during clash with Man United 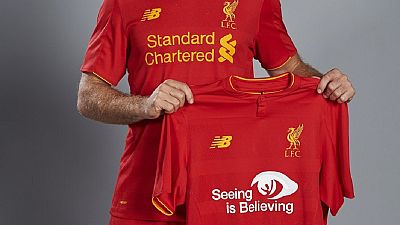 Liverpool have announced that they will wear a special jersey during their clash with Manchester United at Anfield on Monday (October 17).

The team’s jersey will bear the ‘Seeing is Believing’ (SiB) logo on the front as part of the club and its main sponsor, Standard Chartered Bank to help the campaign against avoidable blindness.

The game – the last fixture for week 8 – will be the first time the sides meet this season. Liverpool lie fourth on the league whiles Mourinho’s men lie sixth. Only three points seperate the two sides.

Man Utd has a good, strong team but we have a great team and we play at home. We have respect for them but we’re not scared of them and we know we want to win the game.

Great week! Ray Ban with the #unblurLearning and LFC going to play ManUtd while wearing the #SeeingIsBelieving Tee to support the cause.

“Man Utd has a good, strong team but we have a great team and we play at home. We have respect for them but we’re not scared of them and we know we want to win the game.

“We’ll have a good plan – or more than one plan – so we will be well prepared. Monday night at Anfield, the fans will be behind us, so I think everyone’s looking forward to it,” Liverpool manager Jurgen Klopp said.

‘‘On Monday, 17 October during the Liverpool FC vs Manchester United match, we’ll once again be swapping our ‘Standard Chartered’ logo on the players’ shirts for the ‘Seeing is Believing’ logo, in an effort to raise awareness and funds to tackle avoidable blindness.

Our partnership with LFC has played a key role in helping us tackle avoidable blindness, but the global reach of this televised game, and the social media campaign that will accompany it, will enable tens of millions of people around the world to have the opportunity to find out more about Seeing is Believing,’‘ a statement from the bank said.

After the fixture, shirts used by the side will be auctioned with the funds raised going towards the SiB project spearheaded by the International Agency for the prevention of Blindness (IAPB).