Nigeria: government hands over two presidential helicopters to the Airforce 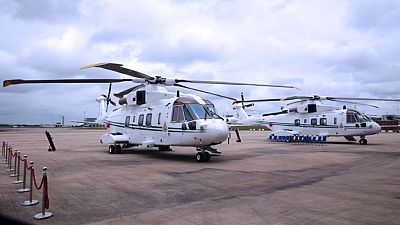 The Nigerian government has officially handed over two helicopters from the presidential fleet to the Nigerian Air Force (NAF). The move is part of the president’s decision to cut down the fleet and to reduce waste.

The helicopters, Augusta AW 101s from the VVIP range of the fleet, were handed over to the NAF by the national security chief, Babagana Monguno in the presence of the Minister of Defence, Mansur Dan-Ali.

Monguno, a retired major general disclosed that the number of helicopters given by the presidency to the NAF was now four. 1x AW109 helicopter and 1x King Air Beechcraft had earlier been released in 2015 after Buhari took over.

Like the two aircraft earlier handed to us, we intend to reconfigure these helicopters and deploy them for tactical airlift of troops and logistics in support of combat operations.

The Nigerian government recently run a full page newspaper advertisement for the sale of two aircrafts from the presidential fleet. A Falcon 7x executive jet and Hawker 4000 are supposed to be disposed off.

A presidential spokesperson on media and publicity, Garba Shehu, had hinted that the fleet would be reduced in September. His tweet to that effect read, ‘‘There is a government committee already in place, working to reduce the number of aircraft in the presidential fleet.’‘

Shehu added that the exercise in respect of cutting down the fleet was still ongoing. In a response to a question about the remaining jets, he added, “Some of the aircrafts will be handed over to the Nigerian Air force to boost their operations.”

The NAF chief, Sadique Abubakar said the gesture by the government had increased the morale of his team in the fight against insurgency in the country’s north east.

“Like the two aircraft earlier handed to us, we intend to reconfigure these helicopters and deploy them for tactical airlift of troops and logistics in support of combat operations.

“Incidentally, the acceptance of these helicopters and the intended reconfiguration efforts are in line with two drivers of my vision,’‘ he is quoted by local news portals to have said.