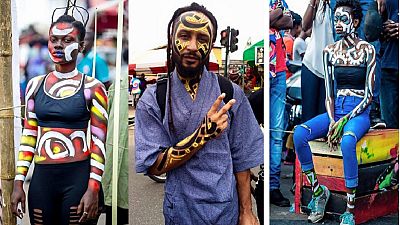 Ghana’s Greater Accra region is home to many suburbs that continue to evolve as a result of ongoing developments. High rise buildings for offices and residential apartments keep springing up across the capital’s skyline.

Nima is a popular and crowded town that is uniquely positioned. It is sandwiched between a residential lot and is the closest community to the plush international airport area.

Aside the narrow link roads within the Nima enclave, two key highways seperate it from its high end neighbours. The Olusegun Obasanjo highway on one side and the Kanda highway on the other side.

Sometimes it takes a natural disaster to reveal a social disaster.

The Muslim dominant area has long been classed a shanty town even though residents protest the description positing that it was more of a multicultural and mixed setting that highlights a diverse socio-cultural paradigm.

In the last few years, most walls of Nima continue to take on a colourful swag. Colour and visual creativity coming from the hands of artists in the area.

Its biggest and reigning ‘son’ in the art spotlight is more of a national and continental artist who continues to define design across Nima and beyond.

Meet Mohammed Awudu, affectionately referred to as Moh Awudu. Moh’s work continues to inspire and project society’s values and ills. The artist in his 30s, a self acclaimed graduate of Nima University, is by far the biggest art export of his community.

Beyond the walls and canvasses that Moh’s paints, brushes and spray cans caresses to transform deftly and patiently, he has stepped up the art.

A painting module that came more to the fore during a recent arts and culture festival in the capital, Accra. The Chale Wote festival held at James Town, British Accra, had a lot to offer by way of artist display. Moh’s work stood out and attracted many patrons.

The colour blends in this daring art form are in consonance with the subject’s attire and surrounding. Be it that the subject is seated, posed in front of Moh painting or posing on the ground. A ground designed by Moh with attractive colours.

Moh’s fans transcend the exhibition centers, beyond the many admiring onlookers. Moh has a huge facebook presence where he presents his works.

At the heart of his works was a painting he put together after one of Ghana’s worse natural disasters in 2015.

Flood and fire killed scores of people in the capital. It inspired and informed his piece titled, “sometimes it takes a natural disaster to reveal a social disaster.’‘ The viral photo shows a young boy in a flood situation.

Behind him are people who have died as a result of the floods. There are buses and other cars submerged by flood waters and a raging fire – representing the fuel station that was burnt after spilled oil caught fire ostensibly from a cigarette butt.

Moh says he dreams of how to pass on his art to younger generations. He believes the best he can bequeath to Nima is to ensure it produces more artists who will continue to positively project the community in the artistic light.

Describing himself as a versatile fine artist and a strong believer in education, he wants to set up an art center for his community, through which children can express their innate artistic expressions under his guidance.