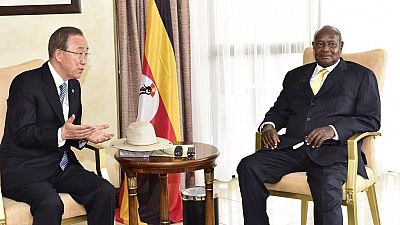 President Yoweri Museveni has disclosed the Uganda rejects an arms embargo being placed on their northern neighbour South Sudan. He was speaking in a meeting with the United Nations Secretary General, Ban Ki-moon on the sidelines of the African Union (AU) summit in Rwanda.

According to Museveni, ‘‘I don’t agree with the arms embargo proposal. I would create a vacuum and plunge South Sudan into more chaos like we have seen in Somalia,’‘ he added that, ‘‘an arms embargo would also destroy the loyal force on which a strong, integrated national army should be built.’‘

He whoever outlined three steps which in his view with help quell the renewed crisis in South Sudan. Museveni called for a regional protection force to protect vice President Riek Machar who does not trust the President Kiir-led SPLA. Machar has since the resumption of hostilities quit the capital Juba.

Votes will force them into alliances. Democracy will compel them to work together.

The Ugandan president also emphasized that there should be a total cessation of hostilities in Juba, that is the case currently as both Kiir and Machar called their forces to cease fighting early last week.

Lastly, South Sudan must work towards elections and democracy because, ‘‘Votes will force them into alliances. Democracy will compel them to work together,’‘ he stated.

He concluded that all of the above plans needed to be built on a well grounded and facilitated timetable in order to stabilize and move Africa’s youngest nation forward.

Forces on the side of President Salva Kiir and his first vice were engaged in intense street battles in the capital lasting five days, till a ceasefire on both sides was reached last Monday.

The combat led to over 200 deaths even though the United Nations representative to the country intimated to the Security Council that the number could be much higher. The country which just came out of a war that started in 2013 to establish a unity government in April this year.

The volatile security situation has led to governments evacuating their nationals from the country. Among others Uganda, Kenya, India, Germany and the United States have airlifted citizens. The unrest is also affecting the humanitarian situation in the country as people flee out of fear of a possible escalation of the fighting.