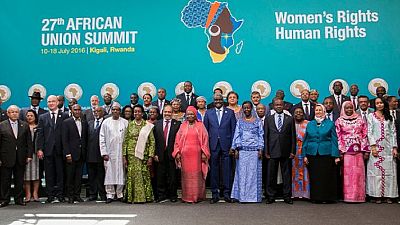 The Executive Council of the African Union (AU) currently meeting in the Rwandan capital, Kigali; has earmarked peace and security as top priority in efforts aimed at facilitating the enhancement of socio-economic well-being of Africans.

The Council therefore through Dr. Dlamini Zuma, the AU Chairperson and Louise Mushikwabo, Rwanda’s Foreign Minister; called for efficiency and robust implementation of decisions taken at the continental level.

Dr. Dlamini Zuma, the outgoing AU Chairperson mentioned that security was a key factor that needed to be considered if the continent is to be transformed from its current economic status. She thus bemoaned on-going conflicts particularly the situation in South Sudan, where renewed violence has led to fears of instability in the five-year old nation.

We must all do more to honour this pledge. The continent cannot stand by and witness the suffering inflicted on the children, women, men and young people of South Sudan, (suffering) inflicted on fellow Africans.

“We made a Solemn pledge during the 50th anniversary that we shall not bequeath wars and violent conflicts to future generations of Africans, and to silence the guns by 2020.

“We must all do more to honour this pledge. The continent cannot stand by and witness the suffering inflicted on the children, women, men and young people of South Sudan, inflicted on fellow Africans,” Dr. Dlamini Zuma said.

“Our 2016 theme on human rights must be a spur to action: to intervene in conflict situations before they spiral into violence, and to ensure that we strengthen democracy, human rights, promote unity in diversity and inclusive governance in all our countries,” she added.

For her part, Rwanda’s top diplomat tasked African governments to work together in the greater interest of ensuring collective benefits for Africans. “This is a time of genuine, serious service to our people, the people of Africa. The Summit should signal the quest of efficiency on behalf of our continent,” Minister Mushikiwabo said.

“Not all seek migration due to ambition alone. Many are compelled to leave because they are in a situation of desperation. Conflicts provoking heavy casualties have risen significantly in the last six years on the continent,” Dr. Carlos Lopes, the UN Under-Secretary General and Executive Secretary of the Economic Commission for Africa (ECA) who is also at the Summit noted.

The AU’s Executive Council comprises of Foreign Affairs Ministers from across the continent. They deliberate and smoothen out the issues that are to be tabled for the meeting of Heads of State later this week.

The Republic of Rwanda is hosting the 27th Assembly of Heads of State and Government of the African Union (AU) under the theme: “2016: Year of Human Rights with a particular focus on the Rights of Women”.

Meanwhile, during the Summit, the African Union (AU) is expected to launch the AU Passport, a flagship project of Africa’s Agenda 2063 with the view to facilitate free movement of persons, goods and services around the continent in order to foster intra-Africa trade, integration and socio-economic development.

A new chairperson will also be elected against the backdrop that the incumbent Dr. Dlamini Zuma has earlier disclosed that she would not be seeking a second term in office. It is believed that she would be returning to play a role in South African politics.