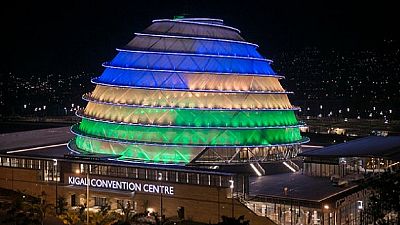 The country is host for the 27th Assembly of Heads of State and Government of the African Union (AU) under the theme: “2016: Year of Human Rights with a particular focus on the Rights of Women”.

The newly constructed KCC (with a capacity of over 5,000 people) has given a face-lift to the capital city, Kigali. All the major streets are colourfully displaying branding of the summit’s artworks with messages to popularize the vision of the African Union and its development Agenda 2063.

We are a few hours from the #27thAUSummit. Watch this video to learn more about it: https://t.co/ObLXCSdXhi #AUKigali2016 #Rwanda #MyAfrica

The Summit officially kicks off on 10 July 2016 with the thirty-second (32nd) Ordinary Session of the Permanent Representatives Committee (PRC) at the Kigali Convention Center (KCC).

The Ambassadors of AU Member States who constitute the PRC, will discuss items on the agenda in preparation for the 27th AU Summit, to be submitted to the Executive Council for adoption.

However, the Twenty-ninth (29th) Ordinary Session of the Executive Council will start on Wednesday 13 July, 2016.

Meanwhile, during the Summit, the African Union (AU) is expected to launch the AU passport, a flagship project of Africa’s Agenda 2063 with the view to facilitate free movement of persons, goods and services around the continent. The move is primarily to foster intra-Africa trade, integration and socio-economic development.

A new chairperson will also be elected against the backdrop that the incumbent Dr. Dlamini Zuma has earlier disclosed that she would not be seeking a second term in office. It is believed that she would be returning to play a role in South African politics.