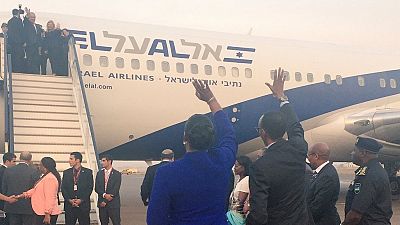 Israeli Prime Minister, Benjamin Netanyahu has arrived in Ethiopia today on the final leg of his historic African tour that has seen him visit Uganda, Kenya and Rwanda, holding high level discussions with leaders of the respective countries.

Netanyahu and his wife left Rwanda, where he visited the Kigali memorial center, laid a wreath and left a condolence message, he also held a joint press conference with president Kagame with the announcement of major policy cooperation.

His itinerary in Ethiopia is the most detailed in the four nation tour which started on Monday. The Israeli premier is expected to meet the Ethiopian Prime Minister, Hailemariam Desaegn.

He would also hold meetings with President Malatu Teshome, before joining an Israeli-Ethiopia business forum on the sidelines of the visit.

He is expected to deliver an address to the Ethiopian Parliament as well. His last engagement in Ethiopia would be a visit to to the National Museum of Ethiopia before he heads back to Israel.