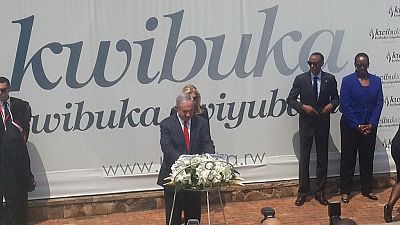 Israeli Prime Minister, Benjamin Netanyahu, has arrived in Rwanda, the third destination of his landmark African tour that has seen him visit Uganda and Kenya in the last two days.

Netanyahu and his wife were received at the airport by his Rwandan counterpart, Paul Kagame and a high powered government delegation.

Prime Minister Netanyahu and his wife Sara landed in Kigali, Rwanda and were welcomed by President PaulKagame. pic.twitter.com/5iS9IAUJ6o

He paid a visit to the Kigali memorial center where he laid a wreath in honor of the people who died in the 1994 genocide after a tour of the facility where the remains of over 250,000 people are interred.

The Israeli premier wrote in a condolence book, ‘‘We are deeply moved by this memorial to the victims of one of history’s greatest crimes – and reminded of the haunting similarities to the genocide of our own people.’‘

He is expected to hold bilateral meetings with President Kagame in areas of shared interests and cooperation before he flies out to neighbouring Ethiopia, the last leg of his tour. He is expected to fly back to Israel on Friday.