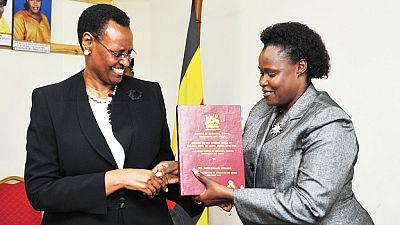 The Ugandan government has dismissed claims that roads were blocked to allow first lady and new minister of education and sports to take office on her first day of official duties.

The denial follows a report on June 27 by the Daily Monitor news portal that the Ugandan Army had blocked roads leading to the Ministry of Education on the day that Janet Museveni, was to officially start work as a minister.

According to the government statement, ‘It is NOT true that the Army blocked off the Ministry of Education offices and denied public access to the premises,’‘ clarifying further that, ‘‘What happened yesterday was procedure for security personnel to ensure a secure passage for all people on the road leading to the ministry given that traffic was usually high during the morning.’‘

What happened yesterday was procedure for security personnel to ensure a secure passage for all people on the road leading to the ministry given that traffic was usually high during the morning.

Ministry of Education & Sports response to press report in the daily .DailyMonitor 28/6/16 pic.twitter.com/LBoygSoDYF

It described the allegation by the journalist who authored the story as misleading and alarmist because all persons invited to the handing over ceremony at the ministry’s boardroom had been granted access.

‘‘Security checks are a normal procedure at every premise of both government and private institutions that are security conscious,’‘ it added.

However, the statement issued by the Patrick Muinda, the ministry’s public relations officer ended with an apology to all persons who were inconvenienced by the vehicular traffic control on the day.

Janet Museveni, a former minister of Karamoja Affairs was named new Minister of Education and Sports by her husband Yoweri Museveni in his new cabinet list after winning polls in February.