CHAN 2021: Who are the favourites as competition gets underway? 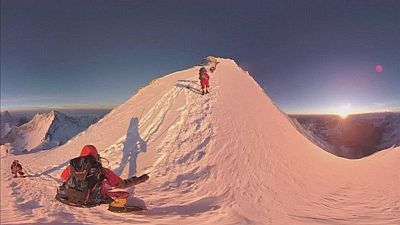 Mount Everest’s southern climbing route, beginning at the Nepalese base camp up to the “Roof of the World”, has been documented by 360° videography and photography.

Omni directional views of Everest are now available online to millions of people around the world with unique 3D recordings.

Promoter of the initiative had already done similar experiences with other climbing icons, like the Mont Blanc, the Cervin, the Matterhorn or the north face of the Eiger.

“The basic idea is to bring the concept of Google Street View into the most beautiful mountains of this planet, and thereby create a new way of documentation of these climbing routes,” said Michael Gyssler of Mammut Sports Group.

The virtual climber can choose different perspectives and experiences the difficult climbing passages through high quality photos and videos.

“If everything goes good with your equipment, that’s ok, but if you have a problem, you have one big problem more and you have to find a solution, and if the weather is not good, it’s cold, it could be very dangerous to do anything with the camera. So you have always a bigger risk if you are there at the same time as alpinist and cameraman,” said Robert Boesch a Photographer.

To record the route, it was not actually professional photographers, but four professional mountain climbers and Sherpa mountain guides on Mount Everest who carried the equipment.

It consisted of a special camera system with a backpack and a cube of six GoPros that record 360-degree imagery and videos.

“Sometimes there’s many crevasses, Base Camp to Camp II, and many blocks, ice falls, and sometimes it can be collapse and sometimes avalanche or rock fall and also high altitude,” said Lakpa Sherpa a professional mountain guide.

Project 360° provides now omni directional views of some 40 peaks around the World.The recordings are also provided via app.