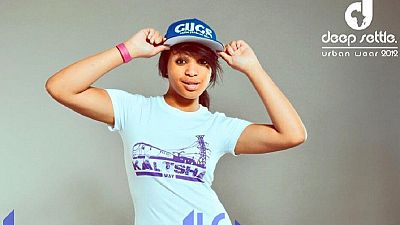 The three young men are bound together by their shared love for fashion.

Upon the completion of their studies, they founded a company in 2010, producing urban street wear called Deep Settle Movement or DSM, which has since become every popular in the streets of “mother city”, which is a known haven for street culture.

A lot of people are going back to the traditions of the urban streets of South Africa. If I have to say to make it, it's just hard work that's all I can say.

“Our first design was like a design of ‘Gugs’; with Khayelitsha which has the demographics of the location where we come from so that we can grab the attention of the customers. So we had an idea and we also had a logo that’s the logo you see on the cap it’s ‘Deep Settle’, so we had the name came from there the words say ‘Deep Settle’ which means it’s a settlement, we shortened the word and took out the ‘ment’ which means it’s a place of origin, it’s a place of staying,” said Retyu.

The trio trade from their small boutique, which also serves as an office and from a stand outside a popular township bar and eatery – Mzoli’s

Most recently they opened operations in New York City. One of the designers Christopher says the breakthrough came about because of the appeal their designs have on the international market.

“As a tourist you don’t know the brand so they like to ask what the brand is all about and then when you give them a story about what the brand stands for and everything of where we started. It makes them more interested and makes them buy rather than coming to a shop just to get a ‘Gugs’ t-shirt, so they love a bit of history about the brand about the designs and what inspires them. So as a team we like to explain that and make a sale so it works for us.”

“A lot of people are going back to the traditions of the urban streets of South Africa. If I have to say to make it, it’s just hard work that’s all I can say.”

The three said their goal was to do more than just make profits, they want to become a beacon of hope for young people who live in poor communities around the world.