New discovery suggest the Bible may be older than previously believed 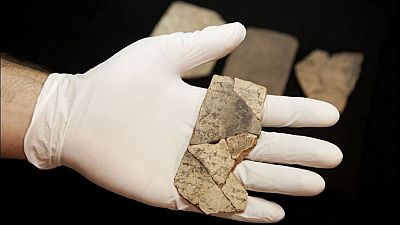 Israeli researchers now think literacy may have been widespread in ancient times – much earlier than previously thought.

Inscriptions have been found on 2,600 year old fragments of pottery from the remote fort of Arad in the Negev desert.

It means key parts of the Old Testament may have been compiled much earlier than scholars thought.

“We checked the number of hands (writers) in sixteen Arad inscriptions and discovered that there are six hands and that literacy goes down in the chain of command of the Kingdom of Judah all the way to the deputy quartermaster of the fortress. The meaning is that there was some sort of educational system in Judah, the meaning is that Judah was literate more than one could have thought before, and this reflects, of course, on the bigger questions of composition of biblical texts,” said Israel Finkelstein an Archaelogist from Tel Aviv University.

Sophisticated imaging tools and software were used to reconstruct the Hebrew letters.

A computer algorithm was then used to analyze the writing to detect differences in style.

“In our project we’re dealing with very ancient and very deteriorated texts. So for example, if you look at one of the letters, you can hardly see the letter itself. As a first step you need to reconstruct this letter and then, only then, the whole game of identifying or analysing different authors begins,” explained Arie Shaus, a Tel Aviv University doctoral student, explains.

A high contemporary level of literacy would support the idea that some biblical texts had already been authored by the time the Bible was written centuries later.

The Dead Sea Scrolls, the oldest known collection of biblical texts, dates from a much later period.