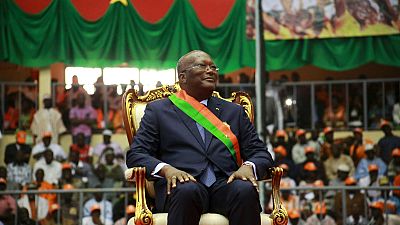 The newly elected president of Burkina Faso Roch Christian Marc Kaboré has reaffirmed his commitment to tackle unemployment and improve the standards of living.

But the president will have to live up to the expectations of the population who look up to him as a saviour to calm the storms after few months of a tensed political environment. Kaboré stressed his commitment while addressing his compatriots on Friday, in the new year address in the capital Ouagadougou.

“The president did not talk about the need to prepare a younger generation capable of replacing the present political class,” Seydou Steve an outspoken human rights activist told Africanews.

Françoise Toé a former candidate in the presidential election thinks reconciliation should be top on the agenda of president Kabore. “He should work with former president Compaoré‘s camp without any discrimination”.

Many people die today in Burkina Faso especially in rural areas as a result of poor health services  and Steve Seydou thinks this should also be in the president’s priority.
In a move to boost the economy, President Kaboré announced his desire to reduce the rate of unemployment.

With a population of about 17.4 million and high rate of unemployment among youths of less than 30 years who represent about 70 % of the population, mistakes in tackling unemployment could proof fatal on Kabore’s political future.

The youths will have to help Kaboré in the creation of jobs by being ready to work in the private sector.
“ I prefer the creation of jobs in the private sector because there are more openings  . I always feel bad when I see many qualified youths some of them master degree holders, lining up to write government concours,” Mireille Somda told Africanews on phone from Burkina Faso.

A peer educator Drame Rokia who believes standards of living are poor in Burkina Faso reminds Kabore about fake promises, “We should not focus on well written speeches. I prefer concrete action rather than well spoken words”.

Roch Marc Kaboré won the recent election with more than 53% of the votes and is counting on international solidarity for democracy to be consolidated in the tiny West African nation.